The YEASTCELL project finished on 31st August 2017. The students are rapidly heading towards completion of their doctorates and successful careers in Yeast Biotechnology. We hope the working relationships and friendships that were formed will carry on well into the future.

The fantastic enthusiasm at the final meeting in Cork (June 2017) was testament to the commitment shown by all participants over the 4 years of the project. The meeting was largely dedicated to group discussions that tried to capture the aims and desired outcomes of PhD Training Networks for both ESRs and project partners. 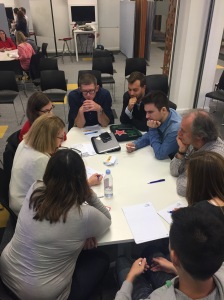 I think he was describing how it feels to be an academic up against the giants of industry.

We also had a bit of fun with the ESRs as they entered the Dragon’s Den. They were given 5 minutes to pitch an idea to the YEASTCELL dragons followed by some tough questions.

The day ended with a tour and reception at the Heineken Brewery in Cork. Many thanks to Jerome and Colette for hosting us.